Retail sales rose a slight 0.3 percent compared with the day after Thanksgiving last year, to $10.69 billion, according to ShopperTrak. The firm says that's still a record for the day.

Never mind the fact that the economy only 'created' a 0.3% rise in sales. I have it on good authority that according to the new economic standard used by the administration, the 'Obama Recovery'® 'saved & created' a 100.3% rise in sales over last year. Had it not been for the 'Stimulus'® that 'Pulled the Economy Back From the Brink'®, there would have been no Black Friday sales this year at all....due to 'Bush Administration Policies'®.

[h/t Instapundit]
Posted by Charlie Foxtrot at 9:56 AM No comments:

TSA: Dear Terrorists...use an orifice, not your crotch...

"...today [TSA Administrator] Pistole insisted "we're not going to get in the business of doing body cavities.""

That's great news, but I am not sure how that declaration jibes with this earlier statement:

"...Pistole said Monday that he disregarded internal advice and decided not tell the public in advance about aggressive new screening and pat-down procedures for airline passengers, fearing terrorists could try to exploit the information."

I am not sure this Pistole guy understands the concept of OPSEC. If you are trying to protect your battle plan, you can't tell the enemy...half your battle plan!
Posted by Charlie Foxtrot at 9:12 PM 2 comments:

It certainly is a confusing enough time to be a lefty, but now this:

Forests in the Interior West could soon flip from carbon sink to carbon source, forest experts say. The region's forests once absorbed and stored more carbon from the atmosphere than they released. But huge conflagrations -- like the 138,000-acre Hayman Fire in Colorado in 2002 and the Yellowstone fires of 1988, which scorched 1.2 million acres -- combined with a series of severe bark beetle infestations and disease outbreaks, have left large swaths of dead, decomposing trees in almost every major Western forest.

Those dead trees are releasing massive amounts of carbon dioxide, turning the region into a net emitter of carbon rather than a CO2 sponge.

The reversal, which has already occurred in Colorado and is anticipated in several other states, is the result of misguided forest management practices and a changing climate, forest experts say. Rising temperatures, resulting in shrinking snowpacks and drier conditions, have left the region's forests more susceptible to disturbances, such as wildfires, bark beetles and disease.

Of course the solution to thwart proliferation of this threat is obvious....cut down all the forests to preclude future forest fires, and thus preventing those burned trees from emitting carbon.

Like I said, a conflicting time to be a lefty....what to do, what to do?
Posted by Charlie Foxtrot at 10:14 PM No comments:

Apparently the secret to solving the on-going bedbug problem is the ordinary plastic bag (I am buying S.C Johnson stock next week)....or so says the NYC Dept of Education.

WELL, THAT’S A RELIEF: New York: Bedbugs invading classrooms at alarming rate, but Education Dept. says there’s no epidemic. “To prevent the spread at some affected schools, students and teachers are putting coats and bookbags into plastic containers and bags, a procedure adopted at PS 197 in Midwood, Brooklyn.” This wasn’t what I expected from the 21st Century . . . .

That's right Glenn, pesticides are soooooo 20th Century! But in this new "Green" century, I am surprised that they are using plastic bags! If they really want to enact meaningless solution and save the planet at the same time, they really ought to be using reusable grocery bags. That way they can delude themselves that they are solving an epidemic and saving the planet at the same time!
Posted by Charlie Foxtrot at 6:50 PM No comments:

Election Fraud? There's an App for That!

Yes, there is an iPhone App to help people report Election Fraud! 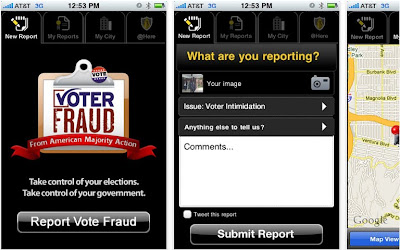 Good news for those looking for an easy way to keep tabs on the New Black Panther Party's shenanigans...
Posted by Charlie Foxtrot at 9:16 PM No comments: