Competence is its Own Reward

I heard a great poem by 'Tarzana Joe' on Hugh Hewitt's show Thursday night. I have not seen it posted anywhere, so I decide to transcribe it myself.

Competence is its Own Reward
By Tarzana Joe

This talk that I lack competence,
Is just a nasty rumor.
I’d laugh at those who say so,
If I had a sense of humor.
Confronted with a problem,
I think once, and I think twice,
And if I can’t resolve it,
I ask Biden for advice.
Solutions we come up with,
I consider fine and dandy.
But for matters of great moment,
I keep the good book handy.
At bed-time when I hit my knees,
I ponder, and I quote it,
And thank the lord each evening,
that Saul Alinsky wrote it.
If I bristle at my critics,
and come on a little strong,
You have to understand,
what I do is never wrong.
I really thought dictators
would kotow and do my bidding,
I vowed to close down Gitmo,
you know I was just kidding.
New York’s the perfect venue,
Where we’ll bring a Sheik to justice,
And I’m doing all I can
So Ahmadinejad will trust us.
I’ve ordered Eric Holder
to keep working days and nights,
To round up every terrorist,
And read them Miranda rights.
The offer I made Sestak,
Shouldn’t cause such consternation.
It was all part of the stimulus,
A little job creation.
So what if Cajun crawfish
Have a slightly oily taste.
I could use another crisis,
Which I won’t let go to waste.
Yes, into waves of turmoil,
I don’t hesitate to leap,
It’s just I am only 6’2”,
And the water’s 8 feet deep.

Posted by Charlie Foxtrot at 11:19 PM 4 comments: Links to this post

Well, President Obama is at it again, wheedling his way into the American attention span by appearing on TV during a major sporting event offering his opinions whether we want him or not. So much for using sports as temporary escape from reality of daily life....the President is there again to remind us that he is still around. I don't know if the thinks we care that he likes sports like the everyday Joe, or if it is a conniving (though poorly thought out) PR plan to get him exposure. Either way, I wish he would stop, and play his narcissistic games somewhere else.

The President did offer two nuggets that we can digest.

1) He is picking the Lakers to win the title. Good Martha Coakley strategy there Mr. President. I am sure that all the GOP candidates for House seats in New England will love to use this to their advantage....

2) He wants us to know that he is deeply concerned about high ticket prices...

"I mean, I think that ticket prices have gotten so high, and I understand that salaries are high, ticket prices are going to be high, but you know, you hate to think that the only person that can go to a game is somebody who's got a corporate account," Obama said. "And that's something that I'd love all professional sports, that's not just NBA, but all professional sports to be thinking about that a little more."

Just imagine, if you had taken all the collective time that you have spent since the beginning of the year watching/playing/opining about sports, and actually traveled to Tennessee to visit and comfort flood victims, your job approval rating might not be so abysmal. Just saying....

Posted by Charlie Foxtrot at 6:59 AM 2 comments: Links to this post

Restrepo - One Platoon, One Valley, One Year

Acclaimed author Sebastian Junger, widely known as author of 'The Perfect Storm', has put together what looks to be a most interesting look at an isolated U.S. Army platoon that he embedded with during 2007/08 in eastern Afghanistan.

The movie 'Restrepo', filmed by Junger and co-hort Tim Hetherington, will be released next month. The film has already won the Grand Jury Prize for Best Documentary at the Sundance Film Festival.

Here is a trailer:

Another (better) version of the trailer can also be viewed in HD here.

Junger has also released a book about his embedded experience titled 'War'. 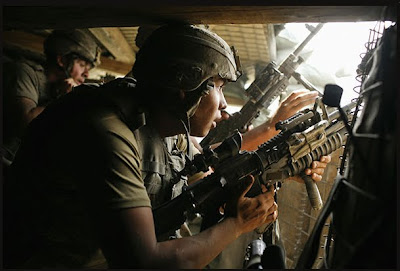 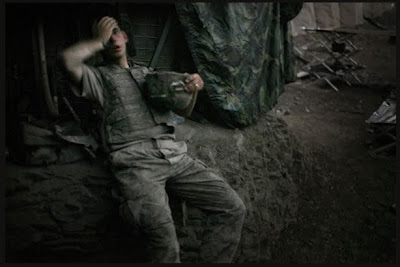 Posted by Charlie Foxtrot at 11:42 PM No comments: Links to this post

Not to go off on a weird Andrew Sullivan-like tangent...but please indulge me this odd question...

Were Elena Kagan and Larry Summers separated at birth?

Or is Kagan simply Summers in drag?

These are the important questions that vex the republic!

UPDATE: Jammie Wearing Fool has another example.
Posted by Charlie Foxtrot at 10:23 PM 3 comments: Links to this post

...They will stop at nothing to kill and disrupt our way of life. But once again, an attempted attack has been—failed...

Awkward phrasing to say the least, but as the Weekly Standard says, "It is as if the president wanted to say the attack “has been thwarted” but then realized he could not. The attack failed because Shahzad did not do a better job of constructing his makeshift bomb. No government agency can take credit for that."

However the most interesting word in that quote from the President is 'they'. Who *is* 'they'??
If we depend upon the White House's official statements, we will never know. for as it turns out, the words words 'terrorism', 'jihad', 'Islam', and even 'enemy' are no longer welcome in the official lexicon of the Global War on Terror Overseas Contingency Operations.

There are two recent looks at this 'phenomenon'.

First from the aforementioned Weekly Standard "Don’t Mention the War", in which authors Stephen Hayes and Thomas Jocelyn ask:

"Why does the Obama administration find it so hard to utter the words ‘terrorism’ and ‘jihad’ and ‘Islamic extremism’?"

So, three attacks in six months, by attackers with connections to the global jihadist network—connections that administration officials have gone out of their way to diminish.

The most striking thing about all three attacks is not what we heard, but what we haven’t heard. There has been very little talk about the global war that the Obama administration sometimes acknowledges we are fighting and virtually nothing about what motivates our enemy: radical Islam.

This is no accident.

Near the end of their article they cite the incomparable Janet Napolitano, who said she doesn't use the word terrorism in order to avoid “the politics of fear.”

Great. We apparently want to avoid offending those who would instill us with terror (and death), by not engaging in “the politics of fear.” As Glenn Reynolds likes to say, the country is in the very best of hands.

In addition to the Weekly Standard, PJTV released an instructive look at how the lexicon has changed in the past several years.

In their video "Censorship of Islamic Terminology" from April 23d, you will see how along with 'terrorism' the offending terms 'jihad', 'Islam', and even 'enemy' are totally absent from important Obama Administration documents like the National Intelligence Strategy, FBI Counter-Terrorism Lexicon, and Lesson from Ft Hood report. 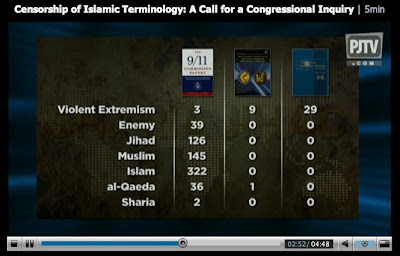 I wonder what words might be included in the report on the "Times Square Incident"? Recent evidence does not inspire confidence. I guess the real question should be...is this best categorized as cultural sensitivity, or appeasement?

At the very least, this should inspire a rise in billboard space rental....

Posted by Charlie Foxtrot at 5:49 PM No comments: Links to this post

Another take on 9.9% Unemployment

This week we saw the April unemployment numbers released, and they ticked up from 9.7% to 9.9%, despite the addition of 290k new jobs.

President Obama says this is progress, "...the storm is receding and the skies are brightening..." But others point out that without the hiring of people to record the Census, the numbers are a bit lower.

That leaves the question about how, if we added 290k new jobs, did the unemployment rate move *up*? As discussed by Jim Geraghty, "discouraged workers – those who had given up looking for work — are getting off the sidelines."

So, why were all these "discouraged workers" suddenly looking for work again in April, and thus being counted again and raising the rate from 9.7% to 9.9%? Was it an improving jobs market? Perhaps so. But here is another option:

President Barack Obama has signed a bill extending unemployment benefits through June 2...People who lost out on the additional weeks of benefits after exhausting their state-paid benefits will now be able to reapply and receive those checks retroactively.

So, I would argue that perhaps the reason the unemployment rate went up was that the government handed out more unemployment benefits.

Posted by Charlie Foxtrot at 12:23 AM No comments: Links to this post

I am sorry did I say Tea Party Protests? I meant May Day Protests.

You can understand my mistake though. When I heard the word 'protests' and 'violence' on CNN, I naturally assumed it must be the Tea Partiers. I mean that is what the media and none other than Bill Clinton has told us is coming, right? Who would have thunk that lefty anarchist thugs could resort to violence during a May Day protest. I thought that type of behavior was reserved to septuagenarian patriots.

Confederate Yankee highlights another riot on the other side of the country.

Imagine, if you will, what would happen if a group split off from a Tea Party protest and went on a rampage, smashing windows and vandalizing cars. Eleven are arrested, and some of those have known ties to right wing militia groups.

Don't you think that dozens of stories would have flooded network news and talk shows, and that government officials—perhaps Obama himself—would decry the right wing violence?

Well, that likely would occur if the violence was right wing in origin, but when a group of radical leftists split off from the main crowd at a pro-communist May Day parade in Asheville, NC over the weekend and went on a rampage, the national media utterly ignored it.

Seriously though, it is sad when the media can foment so much about how the Tea Parties are a forbearance of violence, but continue to fail to cover the actual violence, when it comes from the left.
Posted by Charlie Foxtrot at 12:02 PM 1 comment: Links to this post