Big Stink By The Bay

I must admit a certain amount of schadenfreude when two liberal causes do battle, when the consequences of one impact upon the other. It is even more fun when both are environmental causes...

The most recent example happens in San Francisco (of course!):

Skimping on toilet water has resulted in more sludge backing up inside the sewer pipes, said Tyrone Jue, spokesman for the city Public Utilities Commission. That has created a rotten-egg stench near AT&T Park and elsewhere, especially during the dry summer months.

The city has already spent $100 million over the past five years to upgrade its sewer system and sewage plants, in part to combat the odor problem."

Ahhhh, unintended consequences...the best part of environmental schadenfreude! Low flow and no-water toilets were supposed to save money (water bills) and save the environment. Well, $100 million later we know they don't save money. How about the environment? Not so much....

"Now officials are stocking up on a $14 million, three-year supply of highly concentrated sodium hypochlorite - better known as bleach - to act as an odor eater and to disinfect the city's treated water before it's dumped into the bay. It will also be used to sanitize drinking water.

That translates into 8.5 million pounds of bleach either being poured down city drains or into the drinking water supply every year.

Not everybody thinks it's a good idea.

A Don't Bleach Our Bay alert has just gone out from eco-blogger Adam Lowry who argues the city would be much better off using a disinfectant like hydrogen peroxide - or better yet, a solution that would naturally break down the bacteria.

As for whether the supposedly environmentally friendly, low-flow toilets are worth the trouble? Well, according to Jue, they have helped trim San Francisco's annual water consumption by about 20 million gallons."

So SF uses less water, but pays millions more for infrastructure, and will end up pouring poisonous bleach into the sewers. I guess the best you can say was that some enviros had a good feeling in their soul for at least a little while.

But in hindsight perhaps it would have cost less and been better for the environment if the city had just kept it's regular toilets....
Posted by Charlie Foxtrot at 10:48 PM No comments: Links to this post

Since earlier this month when Unions began their temper tantrum in Wisconsin, one of the mantras repeated with regularity was that "This Is What Democracy Looks Like!" I guess the protesters think they have cornered the market on "Democracy".

But somebody had better tell that to Eleanor Clift..."Since When Does Scott Walker Represent 'The People'?"

[h/t - @mattsheffield]
Posted by Charlie Foxtrot at 5:55 PM No comments: Links to this post

"Why isn’t Obama talking about Libya?"

For many years, at least since the heady days of the Clinton Machine, I have been sure of one thing when it comes to watching national politics...if the Democrats/liberals accuse their opponents of doing something outrageous, it is almost certainly an attempt at mis-direction, as the Democrats/liberals are usually the ones committing those outrageous acts themselves.

Over at the Wall Street Journal, James Taranto makes the same observation about what is being done on behalf of leftist ideology in modern-day Wisconsin (and soon a state government near you!):

"It's quite striking the way almost every lie the left ever told about the Tea Party has turned out to be true of the government unionists in Wisconsin and their supporters..."

Taranto also says: "To make sense of what's going on in Wisconsin, it helps to understand that the left in America lives in an ideological fantasy world...."

While at first I would tend to agree with his point, but the more I think about it, I think they know exactly what they are doing....taking pages directly out of the Saul Alinsky playbook. Primarily, "Pick the target, freeze it, personalize it, and polarize it."

But Democrats/liberals should heed a warning from their radical guru, for he also said "A tactic that drags on too long becomes a drag. Man can sustain militant interest in any issue for only a limited time...."

The public's tolerance for whining on the part of public sector unions that translates to "Gimme gimme gimme!" is already wearing thin in its first instance. If other state's public sector union decide to follow Wisconsin's lead, they may well be in for a heap public opinion trouble....

[h/t - Instapundit]
Posted by Charlie Foxtrot at 5:20 PM No comments: Links to this post

Public School education you say? I don't believe it....

Obviously he didn't get the union memo, otherwise he would know it isn't spelled 'partyers', it is spelled 'baggers'...
Posted by Charlie Foxtrot at 11:15 PM 1 comment: Links to this post

I love this picture* by Anne Althouse from the Wisconsin union protests. "Never have so few ignored so many"

Given that Wisconsin teachers have abandoned thousands of schoolchildren, I am thinking that the Wisconsin Education Association Council is test marketing a new slogan.

I believe they have a winner!

*Aside from the thrice defiled (1-written on, 2-adorned with a fish, 3-intentionally placed on the ground) American flag... Good way to prove your patriotic chops Union members!
Posted by Charlie Foxtrot at 8:17 PM No comments: Links to this post

To quote Bill Hobbs, "Democrats believe in democracy - except when they lose". This is evidenced most blatantly by Wisconsin's run-away Senators.

But I particularly like this pair of Democrats who apparently are disaffected with the form democracy they live under: 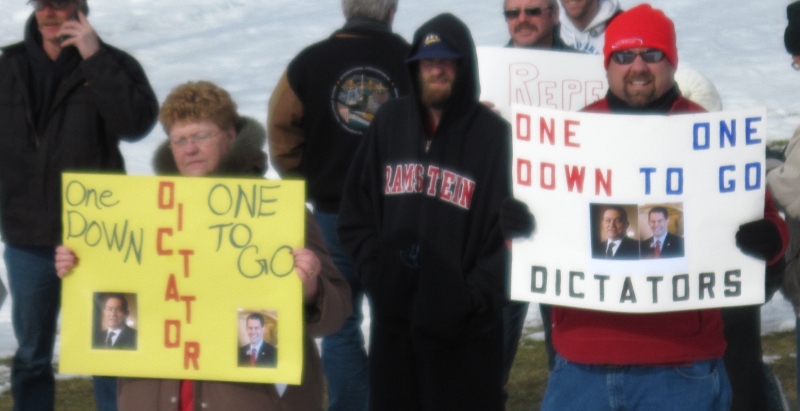 Lets follow the logic here...a Governor who won a legitimate, regularly scheduled election by 6 points and has been in office just over one month, is somehow comparable to a military strongman who ran his country virtually unopposed for the last 30 years by putting most political opposition in jail or worse? Sure...

To take it one step further, these geniuses are suggesting that a recent legitimate election be invalidated because they are unhappy with the result, and....what...have the Wisconsin National Guard take over the state government??

And I wonder how the protesters in Egypt feel about folks with pretty well paying jobs (or any jobs for that matter) appropriating the Egyptian cause for their own selfish ends?
Posted by Charlie Foxtrot at 10:45 PM 4 comments: Links to this post

"It is dismaying to realize that we have a President who cannot talk either intelligently or honestly about his own budget." - Powerline

Posted by Charlie Foxtrot at 9:18 PM No comments: Links to this post

Facing the possibility of a police truncheon to the head? Afraid of having your skull cracked by a well aimed rock thrown by opposing political thugs? If so, then it pays dividends to be prepared with some protective equipment.

Unfortunately, I don't think these guys have been reading Instapundit and Bill Quick.... Nothing says you value your safety better than a helmet of baguette and flatbread.....

[h/t for most images: Sad & Useless]
Posted by Charlie Foxtrot at 9:29 PM No comments: Links to this post