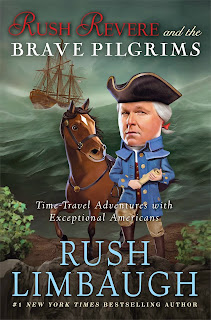 "Okay, okay, my name’s really Rusty—but my friends call me Rush. Rush Revere. Because I’ve always been the #1 fan of the coolest colonial dude ever, Paul Revere. Talk about a rock star—this guy wanted to protect young America so badly, he rode through those bumpy, cobblestone-y streets shouting “the British are coming!” On a horse. Top of his lungs. Wind blowing, rain streaming. . . .
Well, you get the picture. But what if you could get the real picture—by actually going back in time and seeing with your own eyes how our great country came to be? Meeting the people who made it all happen—people like you and me?
Hold on to your pointy triangle hats, because you can—with me, Rush Revere, seemingly ordinary substitute history teacher, as your tour guide across time! “How?” you ask? Well, there’s this portal. And a horse. My talking horse named Liberty. And—well, just trust me, I’ll get us there.
We’ll begin by joining a shipload of brave families journeying on the Mayflower in 1620. Yawn? I don’t think so. 1620 was a pretty awesome time, and you’ll experience exactly whatthey did on that rough, dangerous ocean crossing. Together, we’ll ask the pilgrims all our questions, find out how they live, join them at the first Thanksgiving, and much more.
So saddle up and let’s ride! Our exceptional nation is waiting to be discovered all over again by exceptional young patriots—like you!"
Posted by Charlie Foxtrot at 9:12 PM No comments:

Via William Jacobson, NBC's affiliate in Washington, D.C. reports that police ordered tourists and Vietnam war veterans who were visiting the Vietnam Veterans Memorial Wall to leave the memorial at one point on Friday.

After one group of veterans went around the barricade, "the park ranger told them the wall was closed," NBC's Mark Seagraves reported. "Later another group of vets showed up and moved the barricades. At that point, the memorial filled with vets and tourists. That's when police came and moved everyone out."


All veterans deserve better than this, no matter when they served...

Posted by Charlie Foxtrot at 6:01 PM No comments:

A group of Texas congressmen armed with wire cutters made their way to the World War II Memorial in Washington after they learned the National Park Service had reinforced the barriers blocking the site with wire.

The World War II memorial on the National Mall has become a symbol of the shutdown of the federal government. Earlier this week the National Park Service closed the memorial and erected barriers. Republican lawmakers moved those barricades so that elderly war veterans could access the site.

Not a bad start to civil disobedience!
Posted by Charlie Foxtrot at 5:00 PM No comments:

A lot of hay has been made this week about the Obama Administration's petulant and vindictive decision to put on some political theater, and unnecessarily shut down many national parks and memorials.  The most publicized of course was the barricading (Barry-cading?) of the World War II Memorial. 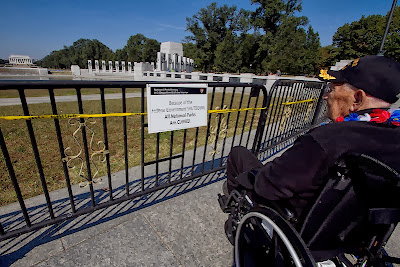 WWII vets showed their spunk and easily moved through the movable barricades to go and view the Memorial.

Headline writers went in to overdrive and broke out the military metaphors:


It was hardly an "occupation", but rather a solemn viewing by elderly veterans that occurs most every day.  However so egregious was this affront, that the barricades have now been wired together to prevent easy "breaching".

Of course, wiring the barricades together doesn't really do much, outside of setting up a situation where someone could be arrested (legitimately or not) for trespassing and destruction of gov't property (if they cut the wire).

I think that the WWII vets should call the administration's bluff, by taking a page out of the lefty's own Alinskyite playbook.  Namely, the aforementioned....OCCUPATION!

Last year the media couldn't get enough of these antics:

Seriously.  WWII vets and their families should set up camp in the Memorial.  Dare the administration to do something about it.  There would be no better political theater than federal agents arresting octogenarians and nonagenarians at a monument to the heroism of them and their fallen comrades.

I am sure these vets could show the lefties a thing or two on how to actually do an occupation.  Perhaps Rolling Thunder could ride in to provide them a little "support".  Even if it is for a short period of time, it would send a powerful message about the audacity, stupidity, pettiness, and the failure of leadership of this administration.

Set up camp and make President Obama feel the heat! 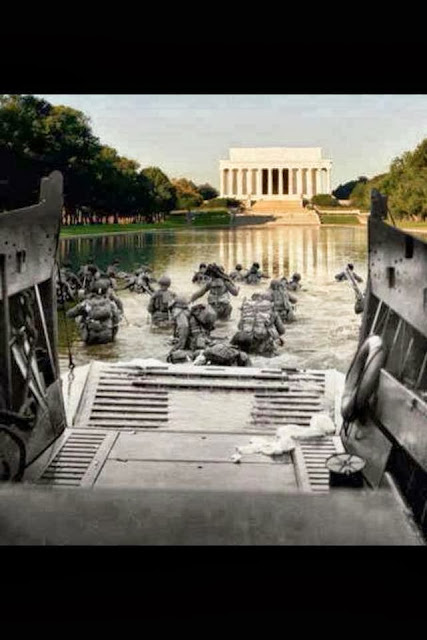 Update 2:  The breaches continue, but where is the occupation?

Posted by Charlie Foxtrot at 10:45 AM No comments: