President Obama has suggested that Israel retreat to it's 1967 borders in order to promote peace...

In a speech to the Arab world--even though he's not president of the United Arab States, President Obama called for Israel to retreat to its pre-1967 borders. From a security standpoint, it's analogous to the United States surrendering California to Japan in 1941. Does anyone think a West Bank Palestine is destined to be a peaceful state like Denmark?

And in response, in order to promote peace, Israel requested that Obama retreat to his 1967 borders.....Indonesia....
Posted by Charlie Foxtrot at 8:09 PM 2 comments: Links to this post

Since the President is keen on reducing the budget deficit by rooting out fraud and waste, then the once place he needs to start cutting is one of his party's sacred cows....Housing & Urban Development.

“The federal government’s largest housing construction program for the poor has squandered hundreds of millions of dollars on stalled or abandoned projects and routinely failed to crack down on derelict developers or the local housing agencies that funded them.”

To quote Glenn Reynolds, "It’s like it’s just a bunch of corruption masquerading as an effort to help the poor."

But if we were to clean up HUD, think of all the Democratic Party donors bureaucrats that would be out of work...and the last thing we need to do is help raise the unemployment rate, right?
Posted by Charlie Foxtrot at 1:51 PM 1 comment: Links to this post

Last week the President went down to El Paso to talk about Immigration Reform...the Democrat form of Immigration Reform. Pushing the DREAM Act (i.e. amnesty) and whatnot. But he also bragged on a bunch of accomplishments, one of which being the allegedly formidable border fence.

According to the official, placed on the internet, transcript, the President said: "The fence is now basically complete."

Despite the fact that this is patently untrue, the most interesting item is the audience reaction. Lets take a wider look at the transcript....

"Then they wanted a fence. Well, the fence is --

THE PRESIDENT: The fence is now basically complete.

AUDIENCE MEMBER: Tear it down!

THE PRESIDENT: Then we’ve gone further...."

Interesting....the President wants to brag on the fence, but the crowd at his campaign rally speech wants to get rid of it... It makes you wonder if the White House doesn't know its audience, or the comments were intended for other ears, particularly though a stand-alone sound bite on the news.

And while we are on the subject of curious transcript inclusions, check out this exchange...

So, here’s the point. I want everybody to listen carefully to this. We have gone above and beyond what was requested by the very Republicans who said they supported broader reform as long as we got serious about enforcement. All the stuff they asked for, we’ve done. But even though we’ve answered these concerns, I’ve got to say I suspect there are still going to be some who are trying to move the goal posts on us one more time.

Second, this was a speech where the President said "And that’s where you come in. I’m going to do my part to lead a constructive and civil debate on these issues...So I’m asking you to add your voices to this debate...."

Well, his Democratic audience did add their voice to the debate....but it was anything but constructive and civil...
Posted by Charlie Foxtrot at 3:16 PM 2 comments: Links to this post

Oil Drops - I Blame the Speculators! 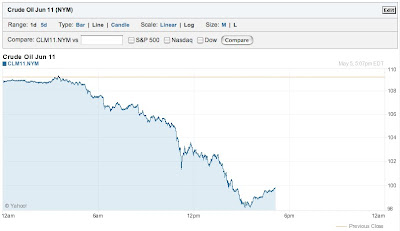 I blame the speculators!

I mean, that is how markets [free ones that is] work, right? If speculators can be responsible for the rise in the price of oil, they should at least get the credit when it goes down....
Posted by Charlie Foxtrot at 5:19 PM 2 comments: Links to this post